A spectacle blind is a key component of pipeline systems that provides isolation of certain sections as the need arises. Typically, the entire device consists of a blind and a ring spacer, connected using a central web or tie bar. Thus, its shape is similar to that of a spectacle.

A spectacle blind is a safety device that isolates a section of a pipeline or an equipment for an extended period. Moreover, it complements a valve when isolation is long term or permanent. The blind part consists of a single sheet of metal, whose size matches the diameter of the pipe. Thus, it provides total isolation, both for compressible and incompressible flow. Also, its design combines the blind with a ring spacer in one device. One surface, the blind, provides total closure of the line, while the other surface, the spacer ring, has an opening that matches the inside diameter of the pipe. Hence, flow may pass unimpeded if desired.

This design offers field operatives a convenient flow control option, because when the blind is not in use, the ring spacer occupies the space between the adjacent pipelines or equipment. Prior to this design, technicians will have to pull the pipelines together to seal the line each time there is a need to remove the blind. For this reason, the blind and ring must be of the same thickness to avoid leakages.

In the process industry, the use of piping and instrumentation diagrams (P&ID) occurs frequently. As a result, engineers devised a standard symbol that represents a spectacle blind.

In a P&ID, two adjacent circles above a tail line indicate a spectacle blind. Of the two circles, the shaded one is the blind or spade, while the hollow one is the ring.

Most blinds fit into long-term installations. As such, durability is a key consideration when carrying out its design and installation. Ideally, spectacle blinds fit between two horizontal pipe runs. Rather than bolting the blind in place around the full circumference of the pipe, like in the case of a stand-alone blind, its installation involves inserting only one of the flange bolts through the hole on the central tie bar.

In addition, gaskets serve as reinforcements of the connection between the flanges and the blind. While the line is open, the blind is exposed and the ring side is within the line. On the other hand, isolating the line exposes the ring side, while the blind/spade blocks off the line. As such, pipe flanges have significant space between them, requiring extended stud bolts to install the blinds. Of necessity, the use of spectacle blinds require consideration early in the piping design process.

This design makes it easy to adjust the spectacle blinds via a few steps. First, loosen the bolts around the flange, leaving only that pass through the central tie bar. Then, rotate the desired face into the space between the pipes. Finally, tighten the flange bolts. Due to its ease of use, the spectacle blind can suit applications where blinding occurs in frequent intervals.

Common locations to deploy these blinds include:

A spectacle blind consists of a spacer and a blind/spade, but there are applications that deploy a spacer solely. Thes spacers fit between flanges to correct gaps or misalignment.  Spacer rings sometimes possess a taper and are machined to specific dimensions.

An overview of spectacle blind vs spacer highlights why one could be more suitable than the other. 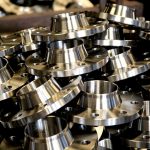 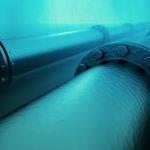 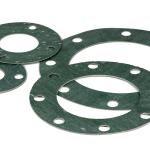 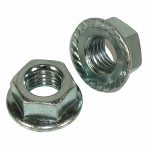 Flange Nuts – Types, Dimensions, and Alternatives
Thanks for subscribing!